East Meets West
A relatively young gallery located in the heart of Mayfair, Sophia Contemporary is fast making a name for itself as an ideally positioned hub on a mission to promote global dialogue through art. Co-founder Vassili Tsarenkov discusses the hows, whys and what’s next with Artscoops
What factors did you consider when choosing the location for Sophia Contemporary Gallery ahead of its opening in 2016?
London was the obvious choice for us for many reasons, including the city’s position as a leading hub for collectors of Middle Eastern art and the fact that it’s been my home for 10 years. Being a multicultural city, we also felt London would help us to achieve one of our key aims, which is to create a global dialogue through art between East and West. We were looking for a site for some time and felt really fortunate to find this location in Mayfair; it’s a beautiful space, ideally situated between Sotheby’s and Gagosian, right in the middle of the action, so it has a great deal going for it.

Sophia represents artists from across the globe and your exhibitions reflect this. How do you select emerging talent?
We use a varied methodology, researching extensively and visiting fairs to view works, while also talking to curators. However, I also instinctively need to feel passionate about an artist’s work when I see it. Since the works we show are primarily object-based, they also need to fit with a certain taste and aesthetic, though I’m fairly open-minded when it comes to media, which could be painting, sculpture, video, photography or multimedia works. Essentially, we’re looking for artists who are cutting edge, embedded in their culture and exploring universal themes in their work, such as love, death and technology, but with a contemporary approach.
What have been the highlights of your exhibition schedule to date?
Of course, I’m proud of all the shows we’ve held, but our first exhibition of new and ongoing works by the celebrated Iranian artist Reza Derakshani was particularly satisfying, since it contributed hugely to the gallery’s successful opening. The show helped to produce follow-up museum exhibitions in Russia and Germany for Reza, including a retrospective, so I was pleased to think we’d played a part in those developments. We’ve just finished a group show which I view as another landmark, due to the reach of the artists and the beauty of the exhibition. The show, titled ‘Im/material’, brought together a truly international representation of artists who are exploring the changing role of the painting in the digital age. It was a very relevant show on a highly topical theme. I am also extremely pleased with the current exhibition, ‘Echo’s Chamber’, the first UK solo show for the American-based artist, Afruz Amighi. Her works have been showcased in several museum exhibitions since she won the Jameel Price in 2009 and are included in museum collections around the US and the UK.

Are there any particular artists that you’re especially proud to have supported?
It was immensely satisfying to think we played a part in helping to raise the profile of the Iranian artist Azadeh Razaghdoost and bring her work to a wider public. She’s a wonderful artist, whose work hadn’t received the exposure it deserved in Europe, but is now really making waves among collectors and curators. I’m delighted to see her becoming critically and commercially successful.

In terms of trends and demand, what is proving popular among your clientele right now?
The rediscovery of artists who were popular with previous generations, but have been under the radar in more recent years, is a micro-trend we’ve noticed. Reza [Derakshani] is an artist who falls into this category, as is the modernist Lebanese sculptor Alfred Basbous, who rightly enjoyed regional recognition, but has now gained critical and commercial success in Asia, for example, too.
We’ve also noticed that more female artists are taking their place alongside their male counterparts. While women artists have played an important role historically and gained recognition from academia and historians, many have struggled to catch the eye of collectors. This seems to be changing now, although it’s a shift I regard as a correction rather than a trend. 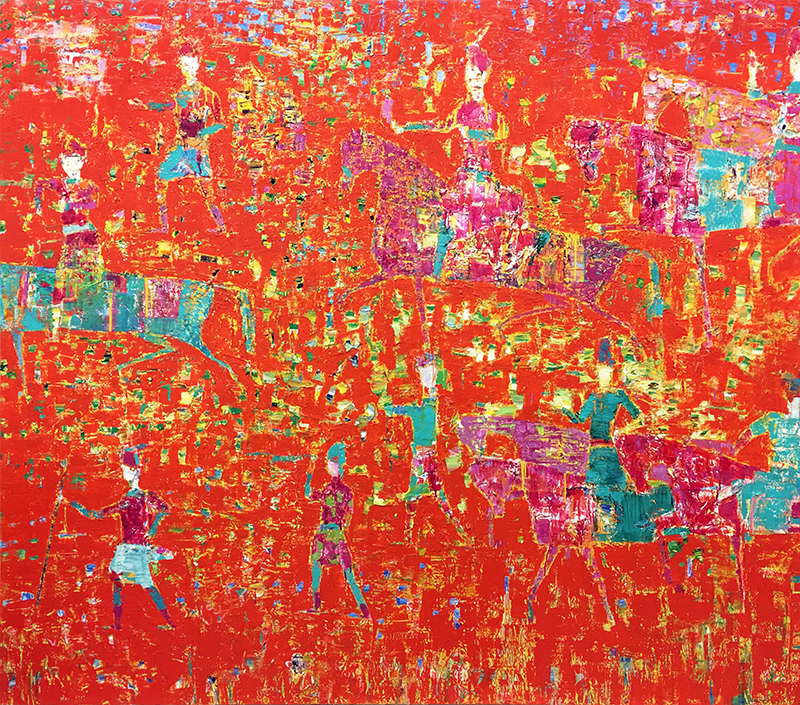 Reza Derakshani Hunting Red. Oil on canvas. 187 x 204 cm.
Photo courtesy of Sophia Contemporary Gallery
Views on the Middle Eastern art market are mixed right now. What is your take on this segment and its future prospects?
I think everyone recognises that there was something of a bubble around 10 years ago, following a period of rapid growth that propelled Middle Eastern art onto the global stage. Since then, the market has gradually settled down again. Given the region’s long history of traditional craft and art, together with the fact that there’s so much variety and individuality from country to country, I think the outlook is pretty positive
What’s on the horizon for Sophia Contemporary Gallery?
We have an exciting programme coming up in 2018 that includes a second solo exhibition of new works by Reza Derakshani from his famous ‘Hunting and Garden Party’ series. We’ll also be showing several joint projects featuring the works of artists who come from different cultures but are exploring similar concepts, which is key to our principle of starting conversations and building bridges through art.
Forgot your password?